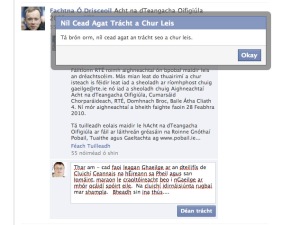 Dear Sir,
I am one of those who disagree with Concubhar Ó Liatháin’s analysis of
the purpose and success of the Official Languages Act. (Sunday
Independent 1 Nov)

There is a perfectly simple reason why the Act is full of details
about a bureaucracy. The purpose of the Act is to make the states
bureaucracies take Irish speakers into account, in a planned,
consistent and sensible fashion.

The compulsory English imposed by the State’s various arms on the
people of the Gaeltacht has been a major factor in the decline of
Irish in the Gaeltacht, and a significant factor in reducing the range
of places Irish is spoken outside the Gaeltacht.

The documents it requires translated are those used by the
bureaucracies to communicate with the public. That these can be
improved, and produced and distributed more cost effectively is true,
but not the purpose of the Act. To allow the bureaucracy to continue
to ignore Irish speakers in these documents – which the organs of the
State consider to be important – would be to signal that Irish
speakers need not be considered.

It should also be noted that it is not resources which would be
available for Irish language projects that are spent on these
measures.

Like every other legal measure, the cost of these measures are met
from the administrative budgets of public bodies, which received no
additional funding when the Act became law. And costs related to the
full range of the Act – not just the small number of translated
documents – consume less than a few percent of the administrative
budget, which itself is a small fraction of the actual budget of the
public bodies.

Nobody ever claimed that the Act would improve matters overnight – it
takes time to change attitudes and to undo the damage done by years of
compulsory English.

But the act is improving matters, and where it is put into effect
properly, has led to a jump in the amount of business conducted
through Irish.

THE Irish Language Commissioner, Sean O Cuirreain, has urged Irish speakers to avail of their right to have their cases heard in the First Official Language in the Irish court system.

Although interpreters were sought in legal actions involving 71 different languages, Irish wasn’t among the top 10 languages for which such services were sought.

Of course, let me hastily point out that the Irish Language Commissioner, An Choimisineir Teanga, the much respected Sean O Cuirreain, hasn’t called on more Irish speakers to break the law, one of the possible requirements to appear in court. He has, however, called on more Irish speakers to avail of their right, under the Constitution, to fight their cases in Irish.

This call suggests to me that an tUasal O Cuirreain is a glass-half-full kind of guy. Isn’t it good news that the court system isn’t clogged up with Irish speakers? Doesn’t it prove that Irish speakers are more law-abiding than the rest of the population?

You may have guessed that I am a Gaelgeoir myself and are, perhaps, wondering why I’m adopting such an apparently anti-Irish stance.

I simply can’t take it any more. This latest scandal is piling ignominy on my beloved Irish language. More and more money — our tax euros — is being spent on translating documents which aren’t read in English so they can be equally unread in the First Official Language.

And yet my six-year-old son attending primary school in the Gaeltacht is starved of reading material in Irish due to lack of resources.

I used to be an editor of an Irish-language daily newspaper — but it closed due to lack of resources. At its peak, more than 4,000 copies of La Nua were being sold daily. That’s not to mention the number of hits the website attracted from all over the world.

When I make these points to my Gaelgeoir friends, they tell me that I’m naive to expect that if translation of the official documents were to stop, the resources saved would be spent on the provision of high-quality textbooks or a youth-oriented magazine as Gaeilge.

The point, to put it bluntly, is that as long as the money is being spent on Irish, no matter if it’s read or not, that’s fine. After all, it provides work

for highly qualified translators who are paid more than your average journalist for their unread translations. On average, they’re paid €14 per 100 words. The scale of the folly is underlined by the recent revelation that translation of rarely read documents cost €1.8m last year — that’s more than was spent on funding Irish language books, newspapers and magazines combined.

You might expect that the undoubted expertise of these translators be used to produce the textbooks or magazines for which there is, it appears, demand among the public?

Not at all. Because the Official Languages Act only provides for the translation of some official documents and doesn’t, for instance, compel the Department of Education and Science to ensure that textbooks of a similar quality are provided in all subjects in each of the official languages.

So now, here we go again, as if we needed more ways to waste public money in entirely futile gestures, the Coimisineir Teanga, whose ultra-modern office in An Spideal is funded to the tune of €1m per year, comes up with another way to put us further in the red. All ‘ar son na cuise’.

When the Official Languages Act was mooted and vociferously demanded back in the early days of the Celtic Tiger, it was sold as the panacea for all Irish language ills. And I have to admit that I was to the forefront of those who believed it might be of benefit — until I read the bill as it was proposed and realised it was little more than a bureaucrats’ charter.

Now we have the legislation and Irish is an official working language in the European Union. All should be well — but it’s clearly not, as the Irish language is increasingly under threat in the Gaeltacht, and Irish speakers are on tenterhooks. As we await the publication of a plan to revitalise the Irish language by 2028 with the ‘creation’ of 250,000 daily speakers, the certainty is that the money doesn’t exist to fund the fulfilment of such a plan. But I fully expect the farcical situation of rarely read documents being translated to continue.

The famed satirist Myles na gCopaleen would have had a field day with this. His memory will be recalled in a revival this month of his classic An Beal Bocht by Belfast-based Aisling Ghear who are taking their production on an All-Ireland tour.

If ever there was an antidote to the farce of futile translation, it’s this. Maybe Sean O Cuirreain could take a time out to attend and realise the folly of his proposal.

Agus is bocht an chosaint a dheineann an tAire O Cuív ar chúrsaí:

But Community, Rural and Gaeltacht Affairs Minister Éamon Ó Cuív defended his policy. He said it is “a fundamental right of the Irish speakers of this country to get certain basic documents in Irish and to get basic services through Irish”.

He said the Official Languages Act 2003 “limits the State’s obligation to translate documents” and without it, “the State could be held legally obliged to translate every single document produced”. 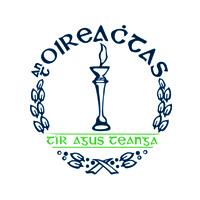